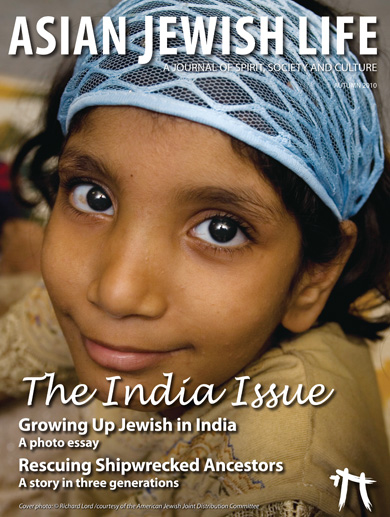 The photographs that appear in this article are part of a larger series taken by photographer Richard Lord. In recent articles examining the contemporary Bene Israel community in India, words such as diminishing, fading and vanishing are often evoked. Perhaps the photos in this part of the collection suggest something different. These photos capture the faces of the future for the Bene Israel. They carry 2000 years of history in a country virtually void of anti-Semitism. Their stories can’t be summarized by a single word or label. It is still up to them to write their narratives

It is a startling reaction that I often face whenever I meet someone outside India who is confused or even doubtful of the existence of Indian Jewry. […] [read online…]

It started with a promise to rescue a memory. Nana’s voice and the story replay again and again, “A very long time ago, your
ancestors left Israel in a ship – a big, wide wooden ship – and they were shipwrecked in India. They were Jews, but they settled in India. In the shipwreck they lost their Torahs, and they forgot their religion.”

When Sadia Shepard made the promise to her grandmother, Nana, to go to Nana’s birthplace, she had no idea where the journey would take her.. […] [read online…]

Is There A Next Year in Bombay?
A film of great uncertainty
by Robin Jeffrey

A smiling bride, an ecstatic groom, jubilant guests, vibrant colors, joyous Jewish music: the start of a future of uncertainty? Next Year in Bombay is a film of questions as co-director and producer Jonas Pariente explains. “Rather than a message, our film carries questions. Questions about a people’s identity, and the dilemma that migrating communities have to face: […] [read online…]

A few years ago when I happened to be staying for a few days with a cousin of mine in Colaba, Mumbai, I went to the street book vendors at her suggestion. She told me that I could get books on any subject at throwaway prices. When I asked for books on Jews, I was told to come back the very next day. When I returned there in anticipation, I was shown a book on juice. […] [read online…]

Between shows and a day job in the tech world, AJL caught up with comedian Samson Koletkar for an interview and a few laughs. Koletkar, a Bene Israel, was born and raised in Mumbai, though he now calls San Francisco home. AJL definitely considers him one of the best Bene Israel, standup comedians currently living in the San Francisco area. […] [read online…]

Articles from the Current issue

Asian Jewish Life – A Look at Hong Kong’s Military Cemeteries: An Effort to...

Asian Jewish Life – Derech Eretz and the Confucian: Way A study of roots...

Feature – Manila Memories: History of Jews in the Philippines – Issue 11

Writer’s Desk: My Two Diasporas On being Jewish and Chinese – Issue 10

COPYRIGHT © Asian Jewish Life is the sole title published by Asian Jewish Life Ltd.. Written material and photographs in the magazine or on the website may not be used or reproduced in any form or in any way without express permission from the editor.
Contact us: info@asianjewishlife.org